Page Likes Are A Horrible KPI For Social Media

Measuring success on social media can be complex and difficult. With so many metrics available to us besides page likes, finding the right one to suit our goals can be a challenge.

A common issue or question we get from clients is why we don’t include fan growth in our projections since a lot of them still use this metric as an indicator of success.

But the truth is, fan growth numbers mean very little or anything at all for your digital efforts. While on the surface, those big numbers may seem impressive, there’s really not a lot of impact on your bottom line for these various reasons:

It’s a common for people to think “The more fans I get on my page, the more likes I’ll get on my posts and the more sales I’ll get.”, but that’s not really the case at all!

The average organic reach for brands on Facebook now is about 2%. A miniscule number that is unlikely to get your posts any traction.

As explained by Facebook’s head of newsfeed, the platform is limiting organic reach on the platform for brands to encourage ad spending and more meaningful interactions for users.

In a recent update to their algorithm, Facebook mentioned that posts from friends and family would be prioritised over public content from brands to drive more engagement, and cautioned brands that they would likely see a fall in their reach and interaction numbers.

Spending your ad dollars on page like ads in hopes of getting more likes in the long run is not a very efficient strategy at all. Even after all the money you put into a page like campaign, you’re only going to reach 2% on average at the end of the day.

In fact, boosting your posts or running ads is likely going to give you way better returns than building fan numbers. At least you’re putting your content directly in front of your audience instead of hoping the Facebook algorithm puts the content in front of the right 2% of your audience.

Now you might be thinking “But 2% of 250 fans vs 2% of 25,000 fans is a big difference!”. Yes, the numbers are different but again how much did you spend to acquire that fan base when you could easily reach the same number of people with way lesser?

Again, the conventional wisdom suggests that people who like the page are going to me more receptive to your messaging and convert.

But you’ll be surprised to find out that that’s not true at all!

Recent experiments conducted by Harvard Business Review showed that fans do not show more receptivity to offers or messaging than non fans.

The experiment was conducted by getting fans who recently liked a brand new beauty brands Facebook page to provide the email contacts of 3 friends who all received coupons. The recipients were broken into 3 control groups:

That’s not to say that endorsements don’t work, but Facebook like and engagement endorsements are relatively weak compared to a friend posting about using a product as proven by this study.

A second experiment was also conducted where coupons were mailed to both fans and non fans of a beauty product. The results again showed that there was no discernable difference between the 2 groups. To quote the article: “Across 16 studies, we found no evidence that following a brand on social media changes people’s purchasing behavior.”

In another experiment, conducted with an insurance group, results showed that points earning activities between people who liked the group and those who didn’t were nearly identical. Which also proves that fans are not more likely to take action vs non fans at least organically.

Facebook has been downplaying the importance of page likes for a while now due in part to previous behaviour from brands.

Buying fake fans and bots was a popular way to boost the numbers but there have been increased efforts on their part to curb this problem with frequent wipes of spam and bot accounts.

Instead, a follow button has been introduced which allows fans to receive updates on new posts and content from the brand.

There are better places to park your budget

A follow up experiment showed that boosting the post to fans actually increased point activity for the insurance company by 8% more than the non fans. In other words, knowing how to leverage on your fans is way more important than acquiring them.

You’re also going to find it very difficult to justify your media spend on page likes once the sales reports come in showing minimal results. That’s not just bad for you now, but it’s going to prove difficult getting allowance for future social or digitally driven campaigns.

In other words, your budget is going to be better served by using it to boost selected posts to your target audiences or non-fans to discover your brand. We previously covered the impact of content promotion so be sure to check that out if you want to learn more about boosting your posts as efficiently as possible!

If page likes don’t work, what does?

It seems like a simple question, but the answer can be very different and circumstantial.

Ideally, your KPI should reflect what you’re trying to achieve with your content and how your particular content piece is going to ease your customer along their journey.

In general, most KPIs involve:

This tells you how many people saw the ad which is used to measure awareness.

This tells you how many people are actually interested in your product if they click on the link on your ad, they are showing some interest. You can use this metric as a conversion metric or to tell how effective the ad is at gaining you leads.

This tells you how interested people are in the content you’re posting out or how willing people are to interact with the brand. This metric is useful when you are trying to start conversations and drive comments and shares.

This is important because again, Facebook measures how likely your content is going to engage the audience and will show your ad to more people if there are people interacting with it.

This metric was created by Facebook to estimate how many people will recall your brand after seeing the ad. It can be good for measuring the long term effects of your campaign and top of mind.

If you had a code attached to your campaign that the audience could use you can check your sales records for the amount of redemptions of a particular code to rank how effective your ad is at conversion.

As you can see, there really isn’t a one size fits all answer to the question and it really depends on what you’re trying to achieve.

We hope this article was informative for you, and your page growth KPIs off your annual reports!

Check out our comprehensive guide of 46 Advanced Tips For Running Your Social Media Channels & Campaigns. We’ll go through come of the techniques we use ourselves with an easy instructional format and it’s also filled with local case studies! 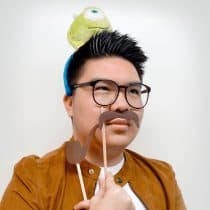 With a background in the editorial industry, Nicholas has written for some of Singapore’s leading web publications including The Smart Local and Tech in Asia. He now works with Clickr to provide clients with localised social media content solutions and strategies to fulfil business goals. He believes in providing users with high quality and relevant content through data-driven processes to deliver the best results for campaigns.

He believes in providing users with high quality and relevant content through data-driven processes to deliver the best results for campaigns.